Pakistan Military Academy (PMA) is one of the most prestigious military academies in Asia. It was established in 1947 after the partition of British India into India and Pakistan. The academy is located in Kakul, Abbottabad, Khyber Pakhtunkhwa Province, about 120 kilometers north of Islamabad.

PMA Kakul is an institute where Pakistan Army trained It’s & friends country military officers. Pakistan Military Academy (PMA) is the oldest and largest military academy of the Pakistan Armed Forces. After ISSB recommendation cadets have to go through training as per their course requirements. Below is the training duration of different commission courses of Pakistan Army. 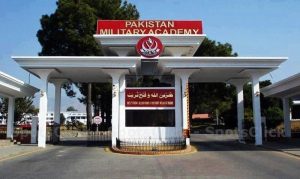 Every day at the PMA Kakul is filled with intense training designed to turn cadets into the country’s future military leaders. The demanding curriculum includes classes on military history, weapons and tactics, as well as physical fitness and teamwork.

For the sake of training, Cadets are organized in battalions and then further into companies. There are 16 companies in Pakistan Military Academy, all of them are named after famous Muslim warriors and commanders. These battalions contain (Quaid-I-Azam’s own) title as well.

The Pakistan Military Academy (PMA) offers a wide range of sports and extracurricular activities for its cadets. These activities are not only a great way to stay fit and active, but also provide an opportunity to develop leadership skills. Some of the sports offered at the PMA include cricket, football, hockey, squash, tennis, and more. There are also a number of clubs and societies that cadets can join, such as the Photography Club, Debating Society, and mountaineering. It is mandatory for cadets to must join a club.

PMA Long Course is a regular permanent commission course. The training duration is two years which is further divided into 6 terms. After completion of training cadets gets the rank of second lieutenant. In LC, cadets have to study 2 years BMAS (Bachelor of Military & Strategy) in PMA Kakul. Rest 2 years study they have to complete after commission.

Through Lady Cadet Course aka LCC, Pakistan army recruit females. Since the cadets are already graduates they have to only do 1 year military training at PMA Kakul. After training, they get the rank of Captain.

For the induction of engineers Pak Army announced Technical Cadet Course aka TCC. The training duration of TCC is one year at PMA Kakul. But cadets have to study 4 years engineering at NUST before getting into PMA for training. Cadets gets the rank of Captain after completion of training.

Army Medical Course is somehow similar with TCC. But through this course doctors are recruited in Pak Army. MCC cadets have to study ⅘ years of MBBS at Army Medical Colleges to get into Pakistan Military Academy for training. After completion of degree+ training cadets awarded by the rank of Captain. The educational requirement is FSC(pre-medical).

Pakistan Military Academy (PMA) is the final stage of training for Pakistani Army officers. Upon completion of their training, newly commissioned Army officers receive their diplomas and are officially inducted into the Army. PMA graduates are commissioned as Second Lieutenants or Captains in the Pakistan Army and are posted to various units and formations of the army.