Military College Murree (MCM) is a prestigious military academy located in the beautiful hill station of Murree, Pakistan. Established in 2008, MCM has a capacity for 450 students in grades eight through twelve, and is known for its rigorous academic and military training programs.

The students at MCM, known as “Himalians,” are chosen for their potential to become leaders in the Pakistani Armed Forces. The college’s motto, “Character, Courage, and Commitment,” reflects the values that MCM strives to instill in its students. 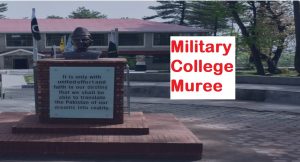 At MCM, academics are given a high priority. The college has a reputation as one of the top academic institutions in the country, and its strong focus on academics has resulted in a high rate of success in sending its students to the Pakistan Military Academy (PMA). In addition to their academic studies, the students at MCM also undergo extensive military training, which includes physical fitness, weapons handling, and leadership development.

But MCM is not just about academics and military training. The students also have the opportunity to participate in extracurricular activities and have a history of achieving success in contests at the national level. These activities help to develop well-rounded individuals who are not only competent in their military careers, but also have a range of interests and skills outside the classroom.

This House had a capacity for 90 cadets, and all the junior cadets at the college were housed there. It was felt that having only one House for the junior cadets led to a lack of competitive spirit and enthusiasm in the various contests and competitions held at the college. It was believed that having more Houses, with smaller groups of cadets competing against one another, would foster a positive sense of competition and increase participation in these events.

As a result, one more House was added for the junior cadets of Class 8th at Military College Murree. This House was named after Captain Sarwar Shaheed, a hero of the Pakistani Armed Forces who was awarded the Nishan-e-Haider, Pakistan’s highest military honor. The addition of Sarwar House was intended to increase the sense of competition and participation among the cadets at the college, and to help foster the values and traditions that are a hallmark of the Himalians.

Before the addition of Sarwar House at Military College Murree, Tufail House was the only residential unit for junior cadets in Class 8th. Tufail House was named after Maj Muhammad Tufail Shaheed, a hero of the Pakistani Armed Forces who was awarded the Nishan-e-Haider, Pakistan’s highest military honor.

The motto of Tufail House is “I CAN, I WILL,” and it is known for its focus on leadership development. Cadets at a very young age are inducted into Tufail House in Class 8th, and a team of competent officers works to groom and develop these cadets. The House officers at Tufail House are responsible for the well-being and overall development of the cadets under their care, and contribute to the personality uplift of these young students.

The cadets of Tufail House are known for their commitment, motivation, and determination. They are seen as the leadership cadre of future leaders at Military College Murree, and are expected to set an example for their peers through their hard work and dedication.

Aziz Bhatti House is one of the residential units at Military College Murree, a military academy located in Murree, Pakistan. It is named after Major Raja Aziz Bhatti, a hero of the 1965 war who was awarded the Nishan-e-Haider, Pakistan’s highest military honor.

The motto of Aziz Bhatti House is “HONOUR FIRST,” and it is known for its focus on upholding the values of honor and integrity. The cadets in this House are expected to live up to this motto and to set an example for their peers through their conduct and behavior.

Aziz Bhatti House has a reputation for fair play and has proven its mettle in all competitions at Military College Murree. The cadets of this House are known for their inherent promise and have consistently shown their ability to excel in a variety of academic, co-curricular, and extracurricular activities.

This house is named after Captain Kernal Sher Khan, a hero of the Kargil War who was awarded the Nishan-e-Haider, Pakistan’s highest military honor.

The motto of Sher Khan House is “DEATH BEFORE DISHONOUR,” and it is known for its focus on upholding the values of honor, integrity, self-discipline, and courage. The students in this House are expected to embody these values and to set an example for their peers through their conduct and behavior.

The cadets of Sher Khan House are also known as “Sher” of Military College Murree due to their ability to excel in college competitions. They are known for their determination and resilience, and have a reputation for being able to turn the tables in a variety of contests and challenges. Overall, Sher Khan House is known for producing leaders who are true exemplars of honor, integrity, and courage.

It is named after Lance Naik Muhammad Mehfooz, a hero of the 1970 war who was awarded the Nishan-e-Haider, Pakistan’s highest military honor. The motto of Mehfooz House is “NEVER GIVE IN,” and it is known for its focus on resilience and determination.

The students in this House are expected to embody this motto and to strive hard to lead from the front in all academic, co-curricular, and extra-curricular activities. The cadets of Mehfooz House are known for their perseverance and drive to succeed. They are committed to excelling in all areas of their studies and training, and are known for their ability to rise to the challenges that come their way. Overall, Mehfooz House is a place where students learn to never give up and to always strive for excellence.

The cadets of Lalak House have unwavering faith in their house officers, who serve as a beacon of light and guidance for these students. The house officers at Lalak House are responsible for the well-being and development of the cadets under their care, and work to ensure that these students have the support and guidance they need to succeed. Overall, Lalak House is a place where students learn to be brave, determined, and resilient, and to work together as a team to achieve their goals.

In conclusion, Military College Murree is one of the best from top cadet colleges of Pakistan for military training and education in Pakistan. With its strong focus on academics, military training, and extracurricular activities, MCM produces leaders who are prepared for success in both their careers and in life. Its stunning location in the hills of Murree only adds to the college’s appeal and makes it a truly unique and special place to learn and grow.

Offrs, JCOs and Solider seeking admission of their sons must have served for at least 10 years in Pakistan Army, However. Person invalidated out of service for reasons attributable to mil service will be entitled to apply, irrespective of their service duration. Sons of personal serving in perm activated Maj Bn will be related at per with request Army personals.

Waiver up to over/ under 90x days is admissible as a spec case under SPAO(3 dated 22 Jul 93). Parents will apply to COMDT of respective institution to obtain resubmitting application forms.

Note :- Wavier of up to 90 days (more or less than the desired age) is admissible with the approval of competent authority.

Admission After In 11 Class

Prospectus are made available at Army Selection & Recruitment Centers. Applications must be submitted on the prescribed admission form attached to the prospectus. Advertisement for admission is given in main newspapers during July/ Aug every year. Admission test is conducted at various stations in the month of October/ November.

Current cat-wise allocation of seats is as under