Join Pak Army through PMA Graduate Course 39. Graduate course is a regular commission, offered by Pakistan Army.  The previous course was 38and the next course will be 39 of the Graduate Course. PMA GC announced once a year in the month of June.  To apply in Pak Army Graduate Course, candidate should have minimum Bachelor (2 or 4 years)

The training duration of Graduate Course is one year at Pakistan Military Academy. One year is divided into 2 terms.  After training cadets are awarded by the rank of captain.

If you want to become engineer in Pak Army than you should apply in Technical Cadet Course in which  candidates can apply after FSC Pre engineering & ICS. However, females can apply in Lady Cadet Course after 16 years of education. 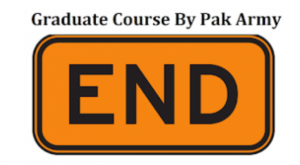 Moreover, from both Pakistan Army websites Information about  Graduate Course has been removed. Check Pictures This is the 2019 picture from the Pakistan Army Website where jobs are announced. Now Pakistan Army Announced that the PMA graduate course has been discontinued for the time being. No one knows the reason behind it. This news awful for those candidates waiting for the course.

This course is a fast promotion course as well because promoted to captain in just three years (2 year bachelors + 1 year PMA training). But in PMA long course it took almost 5-6 y to become captain. You can Join Pak Army through PMA Long Course is also similar to the graduate course Pak army with few differences. 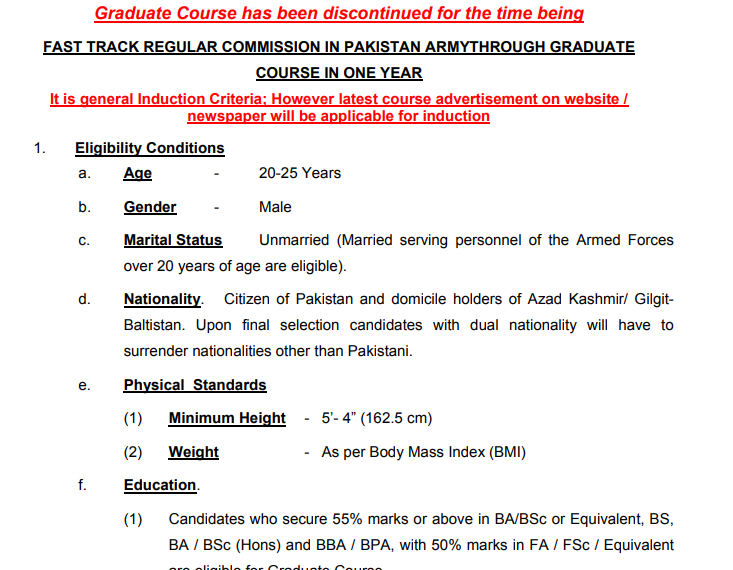 The date for PMA Graduate Course 2023 is not announced yet. When the registration starts candidate can apply online by visiting the official website of Join Pakistan Army. In order to apply offline for Graduate Course Pak Army, visit the nearest AS&RC (Army Selection & Recruitment Center). Pakistan Army website take  72 hours to generate your the test date so keep patience and don’t worry. 39 Graduate course details are listed below.

Note:-Old National Identity Card and Form “B” will not be accepted.

Pak Army PMA Graduate course details are given below. You should qualify one eligibility requirement from one of these.

These medical test are taken in Graduate Course medical test. Unfit candidates will be referred to the nearest CMH (Combined Military Hospital).

PMA graduate course physical test is taken at the nearest army ground. These tests are taken in physical test.

A postal order Rs. 100/- and a Bank Draft of Rs. 500/- in the name of Director
Personnel Administration (Selection), Personnel Administration Directorate, GHQ
Rawalpindi will be attached with the Application Form. Postal Address in Pakistan should
also be indicated in the Application Forms so that call up notice for ISSB Tests/ Interviews
and further correspondence to eligible candidates can be made on the given Pakistani
address. No traveling allowance will be admissible for travelling to and from Pakistan.